David Burdon: the man behind the name 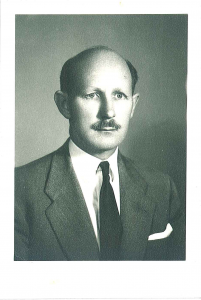 David Burdon was a gifted and inspirational man. His career in hydrogeology extended from 1949 until 1987. Having worked in over fifty countries, he was truly a citizen of the world. His working life spanned the period which saw the growth and development of hydrogeology into a widely respected and recognised field of science. A man of wide interests, he was an excellent communicator, always ready to share his enthusiasm and knowledge.

From 1932-35 David obtained degrees in Civil Engineering and Science (Geology and Mathematical Physics) at University College, Dublin and in 1935-1937 he obtained an honours Associateship from Camborne School of Mines. Between 1938 and 1947 he served as a geologist in the Kolar Gold Field in South India and then returned to Europe to obtain an MSc on the Kolar Goldfield and a PhD on the Leinster Granite. Shortly after his marriage in 1949, David joined the British Colonial Service in Cyprus, where he was in charge of groundwater investigations and development.

In 1952 David joined the UN Food and Agricultural Organisation (FAO) with whom he was to serve until 1974, becoming chief of the Water Resources Branch in the Land and Water Division in 1967. He was based in Damascus until 1960, working in Syria and the surrounding countries and then worked on groundwater resource investigation and development in many other countries in the Middle East, Africa and Asia. In 1974 David retired from his post in FAO and returned to live in his family home in Ireland.  This represented a change of base and emphasis but no slackening in activity and David worked as a hydrogeological consultant to the Geological Survey of Ireland, director of a geological consulting firm, Minerex Ltd and continued to act as a consultant for FAO on many aspects of groundwater resources investigation and management.

David was an enthusiastic supporter of IAH from its very beginning, and was one of those who in 1952 backed the proposal by Leo Picard during the 19th International Geological Congress in Algiers to set up the association, which came to fruition at the 20th IGC in 1956. For years a member of the Italian Chapter of IAH, on his return to Ireland he cofounded the Irish Chapter in 1976 and was elected its first President. He served on a number of IAH Commissions, and was especially active in the work of the Karst Commission. In 1986 David was made an Honorary Member of IAH.

A man of strong moral and religious convictions, David Burdon firmly believed in the importance of water as a vital commodity for the well-being of humanity.  He also argued that it was essential for a hydrogeologist to work in the Arid Zone in order to really appreciate the true value of water. He had a worldwide view of water resources and his advice on water problems was much in demand and readily given. His legacy is contained in his writings and in the memories of a great many people in the hydrogeological community around the world with whom he came in contact over the years and with whom he left a lasting impression.

In 1989 during the 28th International Geological Congress in Washington DC, the IAH Executive in setting up its new Commission for Developing Countries felt it was fitting to commemorate David by naming it the Burdon Commission, and we are proud to maintain this recognition in the educational and development work of the Association.

We are grateful to Bob Aldwell and the Irish National Chapter for allowing us to draw this summary from their own more extended biography of David.

HAS AFRICA RUN OUT OF WATER?